The Other Side of Professional Fishing 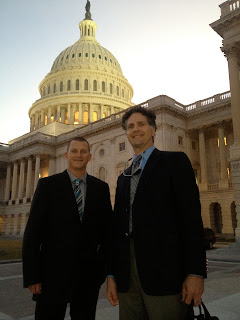 As I talk more and more about the fishery issues we represent, I might as well give a brief overview of the issues we have been working on at the national level for those who wish to know. Over the past few months, I have made several trips to Washington, D.C. to meet with House and Senate offices from across the gulf about fishery issues.

It began with a large trip to maintain funding for the exploration of flexible and accountable management tools in the charter for hire and private recreational fishery. Charter captains from across the gulf took the time away from their businesses and busy schedules to talk to their representatives in DC about the issues facing our industry.

About a month later, I returned to speak against the Commerce, Justice, Science appropriations bill proposed by Congressman Southerland from Florida. This bill was an attempt to block the implementation or development of catch shares from the DC level. While I respect everyone's views on catch shares, I believe there should be no management tool removed from exploration for our fishery managers. Bills such as this are the perfect example of attempts to bypass the local decision making process, where everyone has an equal seat at the table, and regulate fisheries from Washington. Although the bill passed the house, it has not been introduced in the senate as of yet.

The second trip I made was to meet with congressional and senatorial office across the gulf about the Fishery Investment and Regulatory Relief Act (FIRRA). In support of this bill we are trying to gain traction and sponsorship from the southeast to regain funding from NOAA that has been slowly diverted over time from the Saltonstall-Kennedy Act. It is estimated that since 1979, $13.1 Billion has been diverted from the regional management councils. This money was set aside to be used for cooperative research, stock assessment, data collection, and Exploration of new fishery management tools. Our success is still pending as this bill is in the very early stages, but we hope for it to gain traction over the next months and after the election madness that's coming up later this year. The most recent trip is actually being completed as I write this on the plane returning to Houston was to express our overall support of the Magnuson Stevens Fishery Conservation Act. This is the landmark piece of legislation that is responsible for protecting our fisheries, and it's reauthorization in 2006 mandated that we take action to end overfishing. At the time of reauthorization, the fishery was in serious trouble and has since made a fantastic recovery. Magnuson is working, but the problem we have now is an access problem and a 27 year old fishery management plan. That's a topic for another time, but the main focus on Magnuson is IT'S WORKING!


For now, it looks like I'll be able to relax and just go back to fishing and providing access to the american non boat owning public. As more legislation threatening this access comes out of the usual area, I'm sure I'll make the trip back to DC. But for now it's time to just sit back and enjoy the good times to come as the Memorial Day Weekend on Galveston Island!
Posted by Unknown at 12:07 PM