Speak up for Our Sharks

Most recreational anglers rely on charter fishing businesses for their fishing expeditions and realize without charter-for-hire boats, many people in the country would be unable to enjoy recreational fishing, and many captains and crews would be out of jobs.  The Charter Fisherman’s Association believes everyone should have an equal right to access our nations’ fisheries resources. 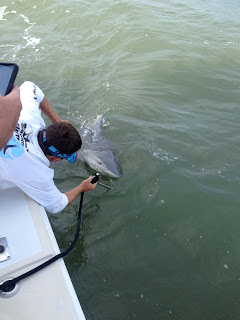 We are asking all American anglers to join us in our ongoing mission. Currently an amendment is being proposed which would limit the fishing of Gulf of Mexico blacktip sharks because some feel they may be mistaken for a similar species, the dusky shark. The blacktip shark and dusky shark are easily identified by obvious visual differences.  Amendment 5 to the 2006 Consolidated Highly Migratory Species (HMS) Fishery Management Plan (FMP) utilizes faulty reasoning as Black tip sharks are a population that is NOT identified as overfished or subject to overfishing. This in turn threatens your recreational fishing without benefiting the resource we also seek to manage. In addition, the proposal seeks to increase the minimum size limit for blacktip sharks to eight feet long. Since the average blacktip adult is only five feet long, this proposed regulation is truly a complete prohibition on the fishing of a species which is completely capable of supporting recreational harvest.

How can you help?

Draft Amendment 5 directly inhibits my opportunity to recreationally harvest blacktip sharks by increasing the minimum size limit.  The best available science shows that this species is not being overfished, and is not undergoing overfishing.  I support a status quo size limit for blacktip sharks and an outreach program for shark identification.